A Veterinary Practice Guide on How Anti-Malware Works 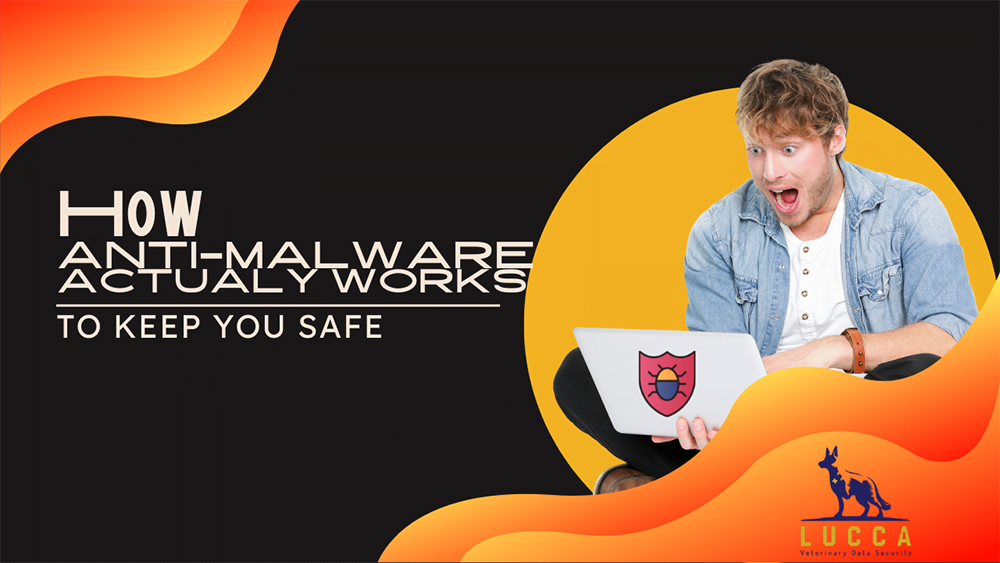 One of the first pieces of advice that most cybersecurity experts give on protecting your veterinary practice from cybercriminals is installing anti-malware. Following what has happened in the past few years, where veterinary practices have become a major target for cybercriminals, it is therefore important to know what anti-malware is and how it protects your practice from cyberattacks.

What is Anti-Malware Software?

Anti-malware software guards against malware such as viruses, spyware, worms, ransomware, rootkits, and Trojan horses. It does this by scanning your entire computer system and isolating programs it considers to be malware. Anti-malware also works by constantly scanning your computer, preventing programs it considers as malware from getting installed, detecting programs that behave as malware, and also removing malware automatically from your computer system.

When talking about anti-malware, there is also another term that usually comes up and cannot be ignored, which is the antivirus. For most people, antivirus and anti-malware are used interchangeably. In some ways, using the two interchangeably can be correct, and most antimalware programs also market themselves as antivirus programs due to people being accustomed to the latter.

However, in technical terms, they are different. An antivirus addresses viruses, a form of malware that infects the computer. Therefore, while all viruses are malware, not all malware are viruses, meaning a program designed to only address viruses will not be able to get rid of all malware, whereas an anti-malware program can get rid of all the viruses on your computer plus other types of malware such as spyware and ransomware.

Malware comes from the amalgamation of two terms: malicious and software. Therefore, in a simple definition, any malicious software can be categorized as malware.

In technical terms, malware is computer programs that are designed to damage data or a computer system. In some cases, malware can also be used to spy, disrupt computer processes and operations, gather sensitive information, or gain access to unauthorized sections of a computer network.

In most cases, malware programs are designed to be undetectable until they have accomplished their goals. They are also able to spread through emails, operating systems, removable media, or through the internet, where they are downloaded without the knowledge or consent of a computer user, stay hidden, and execute malicious code that damages their target victims’ systems.

Some of the most popular types of malware include viruses, ransomware, Trojan horses, worms, rootkits, and spyware.

How does Anti-Malware work

In a heuristic method of detecting malware, an anti-malware program uses heuristic analysis to detect threats that have been missed by previous scans. This is achieved by analyzing program behaviors and characteristics and determining whether such behaviors are mostly associated with malware. For instance, a program deleting important files can be flagged as malware.

Therefore, despite being an effective method, legitimate programs performing duties they were programmed to do can also be flagged as malware. That is one disadvantage of the heuristic method of malware detection.

In most anti-malware programs, they compare a detected program with a list of established malware programs. If the program is similar to any of the malware in the database, it is flagged as malware and can be removed.

One disadvantage of this method of malware detection and removal is the constant need to update your anti-malware program. This is done to ensure that you always have an updated list of malware. Otherwise, if your anti-malware is not updated, you may be attacked by malware that would have otherwise been detected.

This is one of the most effective methods of removing a malware program. Not only does it identify potential malware, but it is also significantly more accurate because it tests these programs before flagging them.

In all the methods we have discussed above, we have seen that the removal of malware is mostly the end goal. Basically, in this method, the flagged malware programs are isolated, preventing them from causing further damage. You are then allowed the option of removing this malware by the anti-malware programs. At this point, the program considers removing the software will not cause damage to your system.

A deeper understanding of how the antimalware program on your computer works can give you perspective on whether it should be installed on your computer. As seen above, the chances of needing such programs are high, and methods used to guard, detect, isolate, and remove malware is complex and, in most cases, work to protect your system.

Therefore, as a veterinary practice, it is important to have anti-malware software installed at all times.

5 Ways Your Cell Phone Puts Your Hospital At Risk