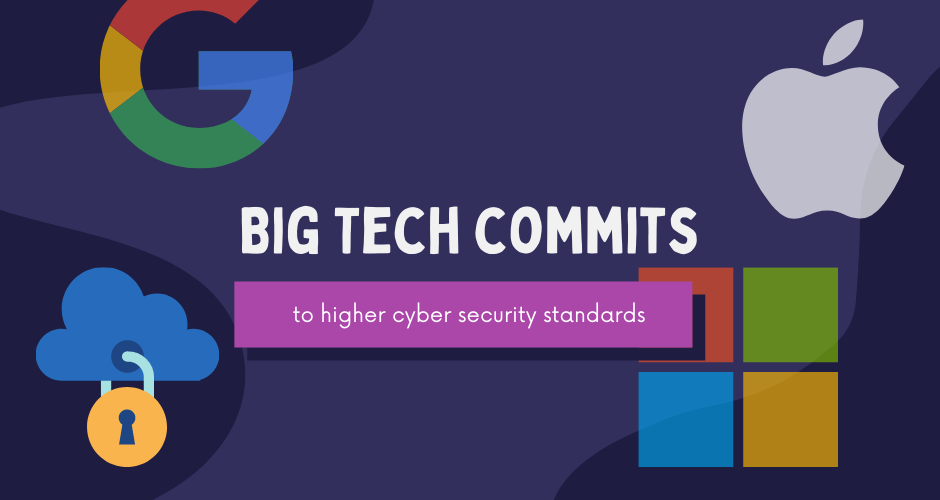 Tech giants Microsoft, Google, and Apple pledged have to invest billions in bolstering cybersecurity in the US, after a meeting with President Joe Biden at the White House.

The announcement came following months of high-profile ransomware attacks, including the Colonial ransomware attack that paralyzed the oil industry in the US and causing fuel shortages in the East Cost. The attack, which was carried out following the discovery of a single compromised password by cybercrime group, the DarkSide, resulted in a payment of $4.4 million to the cybercriminal groups and a surge in prices by noticeable margins.

Microsoft, one of the companies that attended the meeting, has also been a victim of high-profile cyberattacks this year, with the latest one being the Microsoft Exchange hack, which was started by a state-sponsored Chinese hacker group called Hafnium. The hack impacted thousands of businesses, organizations and government agencies around the world and also gave rise to similar attacks from other cybercriminal groups who also exploited the vulnerability to spread ransomware attacks.

Amid the escalating ransomware attacks that have impacted the US and compromised the country’s national security, the White House has been pushing efforts to fortify the country’s cyberinfrastructure to levels that can withstand future attacks. To achieve this, they chartered a roadmap that called for wider cybersecurity collaboration between the private and public sectors.

Below are some of the commitments each of these companies made and how these pledges will impact the veterinary practices, which have also fallen victim to the recent surge in ransomware attacks.

Microsoft pledged to invest $20 billion over the next five years in the cybersecurity sector. They also released $150 million after the meeting, which will go to upgrading existing security infra for federal, state, and local governments.

Microsoft also announced that they would be getting into partnerships with community colleges and nonprofits, where they would be involved in training in the field of cybersecurity.

On the products, the company indicated that they would be designing products that are integrated with cyber security measures. They also reiterated their commitment to providing advanced security solutions to companies, governments and organizations that use their products.

The announcement by Microsoft, including the $20 billion cybersecurity investment, will directly impact veterinary practices around the world, which are heavily reliant on Microsoft products that include operating systems, word processors and cloud computing.

In the past few months, veterinary practices have been hit by ransomware that has compromised the Microsft Exchange and the latest print spooler attack that made it easy for veterinary practices to be attacked by ransomware. The investment, which will ensure such attacks do not happen in the future, will save practices cost of cybersecurity operations and increase confidence in Microsoft systems that has taken a hit this year due to many cyber attacks they have experienced this year.

Google committed a $10 billion investment over the next five years in the cybersecurity sector. Some of this money will go towards the Zero-trust programs.

They also indicated they would also be securing the software supply chain and enhancing open source security.

Google also agreed to train cybersecurity experts to meet the rising demand in the US. They indicated they would be taking 100,000 under its umbrella and train them on digital skills required to safeguard systems. At the end of the training, certificates, which are industry-wide recognized, will be issued to successful trainees who complete the training.

The largest ransomware attack on veterinary practices was as a chain supply attack. Cybercriminals gained access to the update feature of a crucial software system used by the National Veterinary Associate (NVA) a California-based company that owns over 700 practices across the US. The attack resulted in the shutting down of over 400 practices across the country and the loss of data from the company.

Google’s investment in preventing supply chain attacks will ensure that such attacks do not happen again.

Apple did not commit to a specific amount over the next coming years. However, they indicated that they would work with their 9,000 plus suppliers across the US to ensure that they implemented the multi-factor authentication.

Apple also indicated it would invest in training future cybersecurity experts, get involved in vulnerability remediation, event logging and incident response practices to its suppliers.

The announcement that they would train future cybersecurity experts is a great gesture to veterinary practices.

Their emphasis on multi-factor authentication also brought to light the issue that many veterinary practices do not implement, the verification process. The push will help veterinary practices also implement such features, further securing their systems to a level that can’t be compromised.

How to increase your cybersecurity without a large investment

One way to help bolster your cyber security defenses is to take our RACE approved CE via Patterson Veterinary University, IT Fundamentals. Being educated is the first step in protecting your hospital.

Want a simple, affordable cyber security solution for your hospital? Schedule a FREE call today to see how the Lucca Veterinary Data Security suite can help keep you safe from cyber criminals.