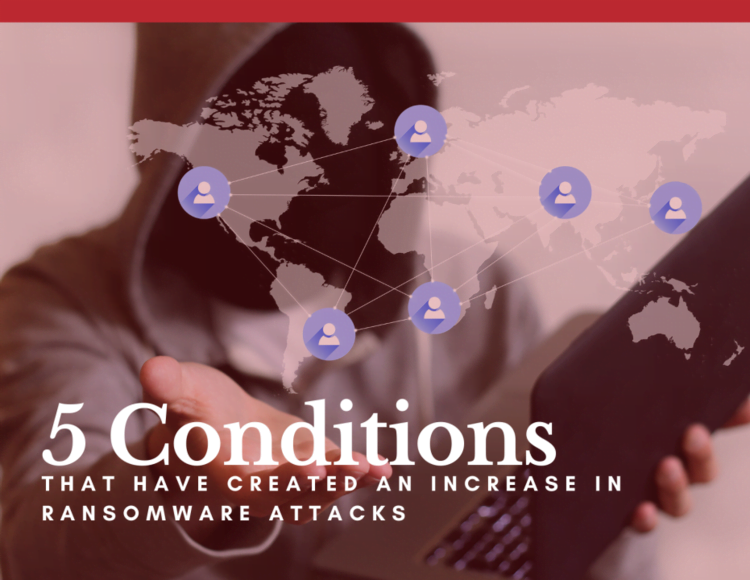 The recent spike in ransomware attacks shows no signs of slowing down, as more companies continue to fall victim to cybercriminals. What used to be a nuisance, that impacted everyday people using methods such as email scams, credit-card skimming, reselling Social Security numbers and phishing has turned into a national security issue, threatening every facet of the economy and interrupting day to day running of businesses.

Veterinary practices have also not come out of the recent surge in ransomware attacks unscathed. The recent attack on Kaseya exposed many veterinary practices that relied on Kasaya as their managed service providers and were exposed to risks that ended up affecting thousands of businesses around the world.

Ransomware cyberattacks have become lucrative, with companies willing to shell out millions of dollars to cybercriminals in exchange for their hijacked data. Cybercriminals are also becoming more and more economically motivated, and as more companies and organizations continue to show a willingness to pay them out, the attacks have continuously grown. However, economic motivation is not the only reason that has contributed to the recent surge in cyberattacks in the last few months. Here is how to make sense of the surge in attacks and how you can prepare your veterinary practice from becoming victims of cybercriminals.

In previous years, cybercriminals used to work in isolation to execute their cyberattacks. This meant that they had limited resources to work with, and therefore, the quality of programs they used for their attacks would not be used for large-scale attacks. It also meant that, although they were financially motivated, they did not want to attract attention to themselves, resulting in targeting personal computes, carrying out credit card scams, and phishing attacks.

This mode operation, however, has been phased out by more sophisticated business models that aim to maximize the impact of the ransomware to exert pressure on their victims so that they can extort the maximum amount of money. The unfortunate thing is, this model of operation is working. Cybercriminals and cyber experts agree that the change of tact in their cyberattacks has resulted in their victims caving to their demands.

Cybercriminal gangs such as REvil have also developed more complex business models that involve contracting out their ransomware to smaller cybercriminals organizations in exchange for a split in spoils obtained from their attacks. The model, which is referred to as RaaS ( ransomware as a service) has helped these gangs reach more victims resulting in huge payouts.

Hijacking and leaking of sensitive data

Normally, ransomware attacks involve cyber criminals gaining access to victims’ computer systems and encrypting the data, after which they would demand payments from their victims in exchange for a decryption key.

However, this has also changed, and cybercriminals are now looking to escalate their attacks to force their victims to respond. Through the years, the cybercriminals noted that they needed to exert more pressure on their victims if they need to make more money from their cyber attacks. Now, in addition to locking their victims’ data, they now take some of the most sensitive data and threaten their victims to release it in public if their demands are not met. Some cybercriminals have also gone as far as contacting clients of organizations they have compromised, notifying them of their successful cyberattacks and advising them to contact these organizations if they want to keep their data safe.

Recent news reports indicate that JBS paid more than $11 million to cybercriminals when their meat plants were compromised by ransomware. This was after the Colonial Pipeline had already paid $4.6 million in ransom to the Dark Side cybercriminal gang.

The most recent Kaseya attack is still unfolding and cybercriminals responsible for the attack have upped the rules of the games and are now demanding at least $70 million to Kaseya for the decryption key. There have also been numerous reports that small organizations, veterinary practices and businesses that have also been compromised by the Kaseya attack are also being asked to pay over $40,000 to get their systems and data back.

The government has already advised victims not to pay ransoms to cybercriminals numerous times because that will invite more attacks. However, nothing is stopping private businesses from paying up the ransom to get their data back, and so far, the norm has been to pay up, and cybercriminals know that a successful attack will result in huge payouts.

Cryptocurrencies have also contributed to the surge

Cryptocurrencies have been a game-changer for cybercriminals. The anonymity they offer to their user, the recent rise in price has made cryptos such as bitcoin and ethereum very attractive to cybercriminals.

In almost all the recent attacks that have resulted in payouts, the preferred mode of money transfer in order to get their data back has been cryptocurrencies. Cybercriminals looking for their big payday are assured of a platform where they can easily receive and transfer their spoils anonymously.

Most cybercriminal gangs, including REvil, operate in countries where that are not very strict with cybercriminal gangs. In recent weeks, the US government has been in constant communication with their Russian counterparts urging them to stem the threat of cybersecurity originating from their countries.

Cybercriminals having safe havens, where they can operate with almost zero scrutinies has been a major contributing factor to the current surge in ransomware attacks.

Good cyber security doesn’t have to be costly or complicated!

Contact us today to see how we can help you create an effective cyber security plan that keeps your veterinary hospital safe! CONTACT US NOW